So I made the Bug a pair of pajamas for her 6th Birthday party (it's a pajama party).  I'll share them later. But she loved them so much that she begged to wear them to bed and I said no because they are for her birthday party which is still a few weeks away.

And I did what any rational human being would do.
I let her loose in my knit fabric stash and told her I'd make her another pair. 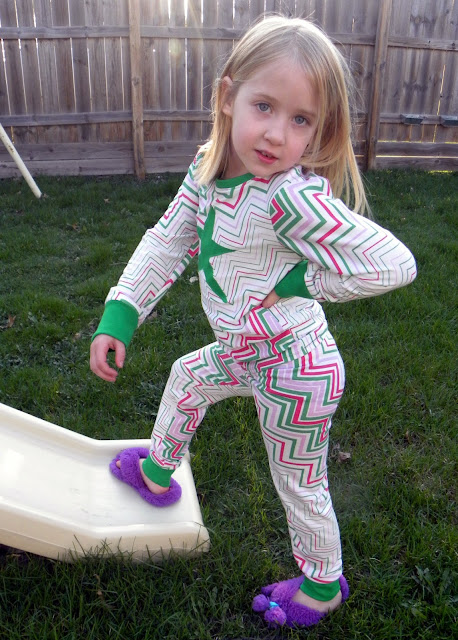 I think it speaks to the quality of the pattern that I cut and sewed these in about an hour and a half. 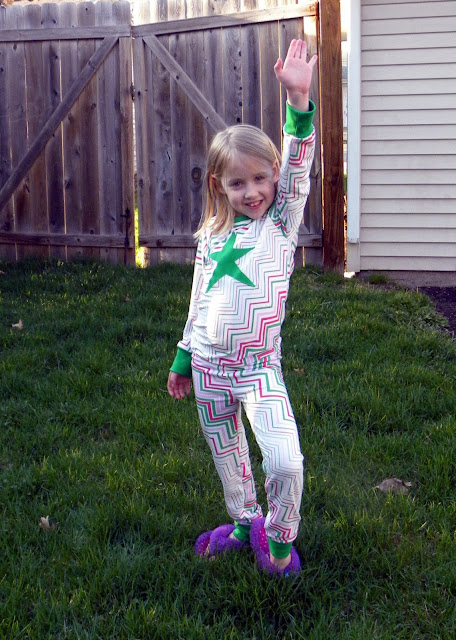 And she adores them.
The zig zags are a bit much for me but they are pajamas. . . they ought to be fun. 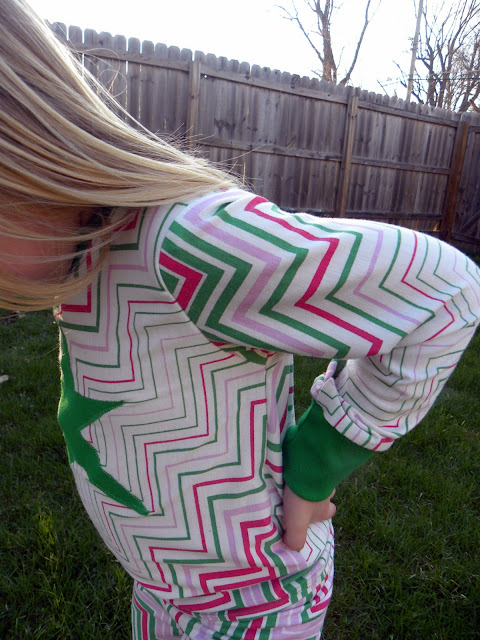 The pattern is one I've had for a while. I was going to make the Bug Christmas pj's out of it but then fell in love with the Sugarplum nightgown.  I'm glad I finally got around to making these. 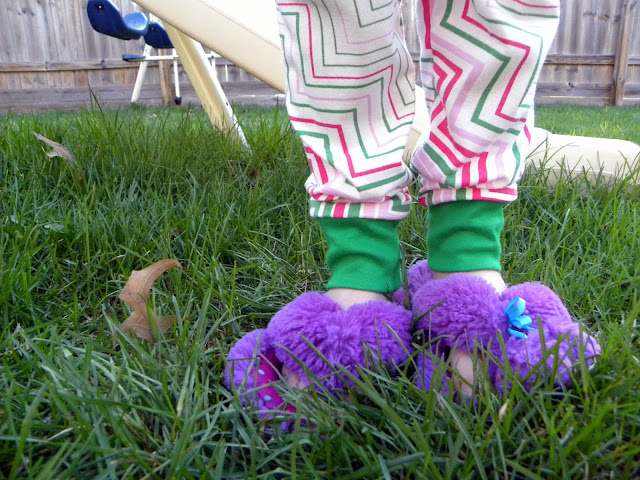 It's called Alex and Anna Winter PJ's from the Peek-a-boo Pattern Shop. Seems silly to make winter pjs on the verge of summer but you know, with the ac and all, sometimes summer nights are a little chilly. And these are big enough they will still fit next Fall/Winter. 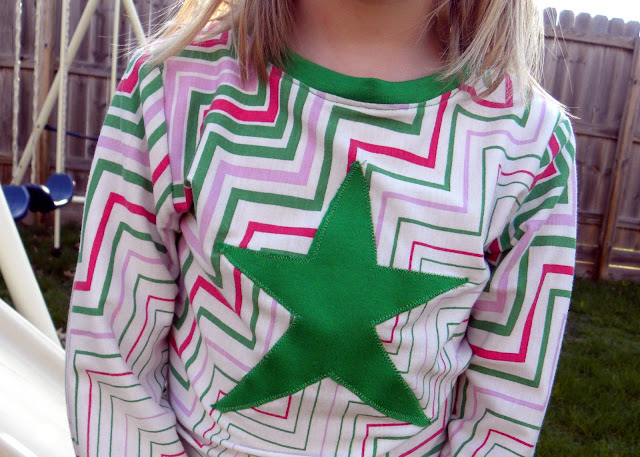 She wanted a star on the front. It's a little wonky. That's what happens when you freestyle it. But I kind of like it.

She was all about doing a photo shoot.
Until we nearly stepped on this little guy. . . 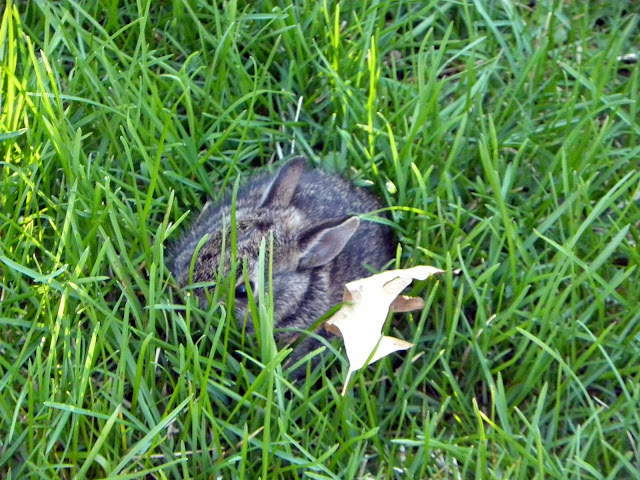 And then it was all about him. 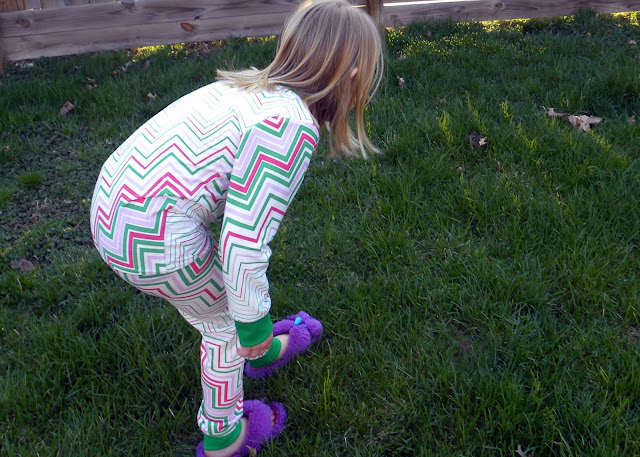 She reminds me a bit of her bunny hunting Aunt when she was this age.  We told her if she could catch one she could keep it. 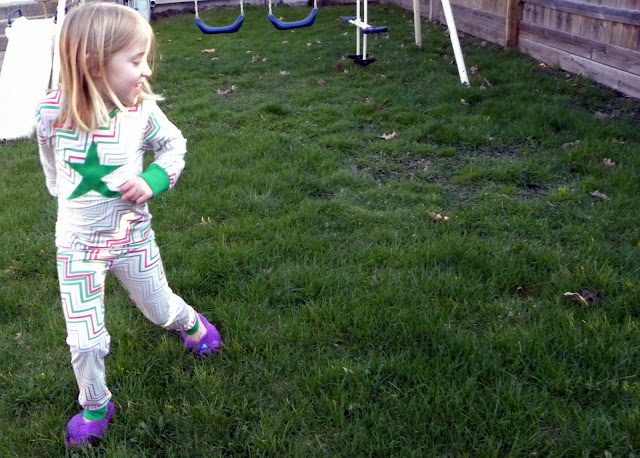 Knowing full well she would never catch one.
Her niece is the same way. 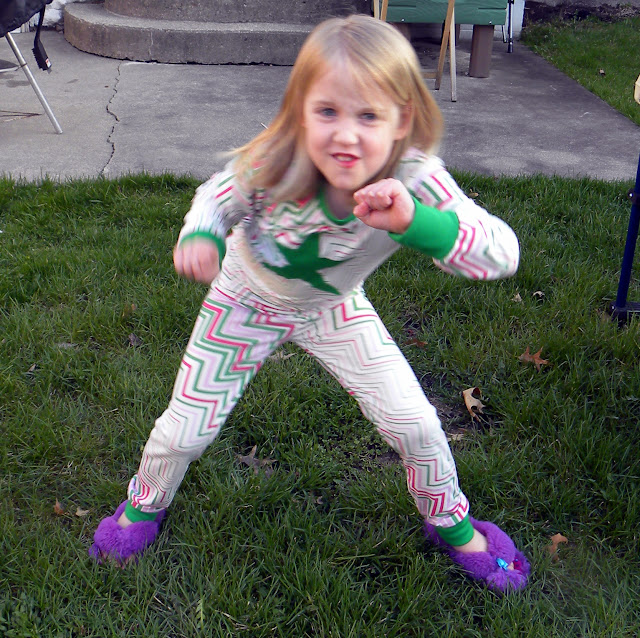 Once we started with this it was obvious all concentration and focus was lost.
But it's good to know she loves her pj's.

~Lindsay
Posted by Lindsay @ 402CenterStreet.blogspot.com at 9:07 PM No comments:

A few months ago I made a couple of bags for my friend who crochets. She was in need of something to hold her projects, big and small.  A few weeks ago she mentioned that she could use something to carry her crochet hooks in as well. 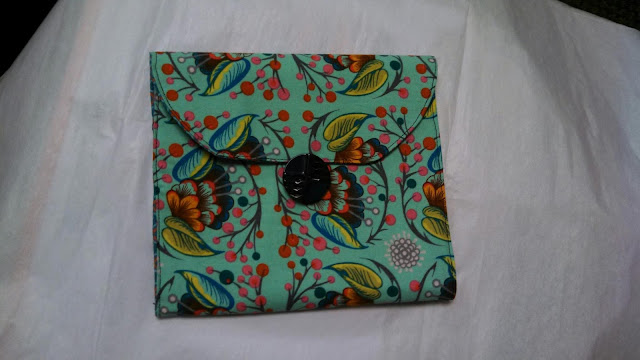 So I googled around for tutorials and found one at Little Birdie Secrets that fit the bill.  While I've crocheted before, I am far from experienced and I liked that this pattern had a place for everything AND provided me with measurements for each hook pocket. 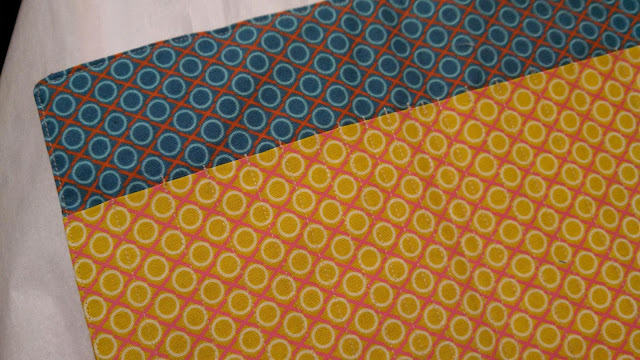 I am kind of geeked out over the fact that I was able to match my patterns pretty stinking well between the yellow and blue fabric. The inside pockets have room for pretty much every crochet hook imaginable. 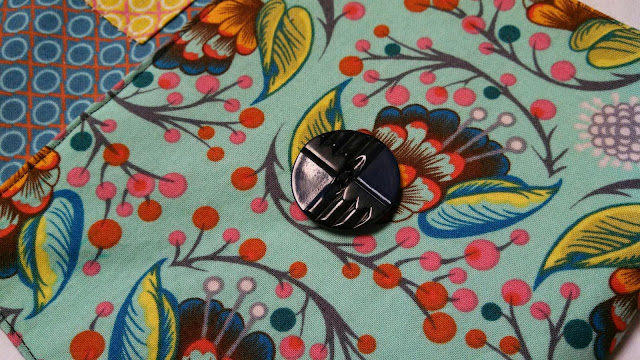 It closes with an elastic loop over a vintage navy blue button. I think it's subtle and sweet on this somewhat busy Anna Maria Horner fabric. 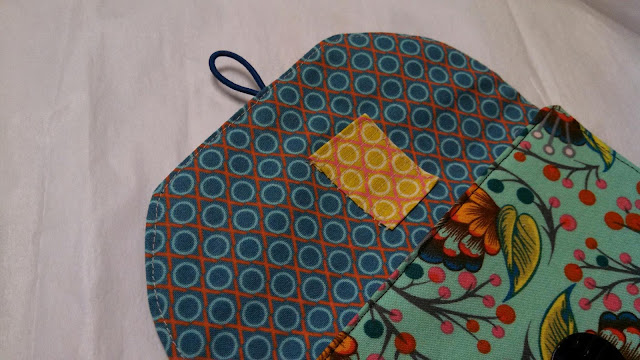 There is even a little pocket on the flap for yarn needles. I never would have thought of that. But being a sucker for pockets, it thrilled me that this clutch seemed to have one for pretty much everything. 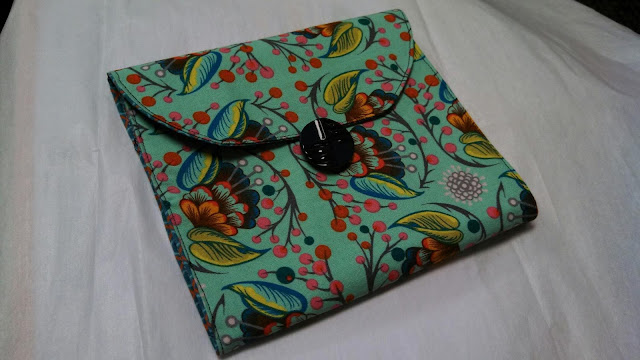 So there you have it. A crochet hook case for a crafty friend I admire greatly.
It's quite lovely and goes nicely with her other bags.  It was a fun, quick sew that didn't take much fabric so it would make a great gift.

~Lindsay
Posted by Lindsay @ 402CenterStreet.blogspot.com at 8:12 AM No comments:

My intent was to post this on Friday. That didn't happen and I thought maybe Sunday. Well here we are on Wednesday. . . is anyone still interested in an Easter outfit? 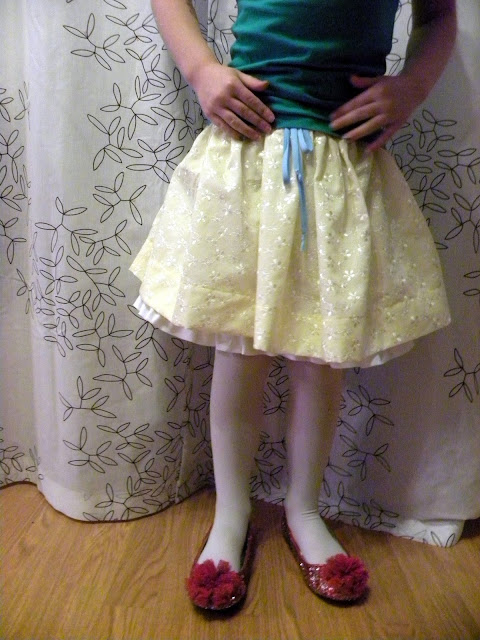 I did this pattern test for Go To Patterns Boardwalk Skirt ages ago. I gave the Bug several fabric choices and she picked the sweet pastel yellow eyelet. She is always surprising me. 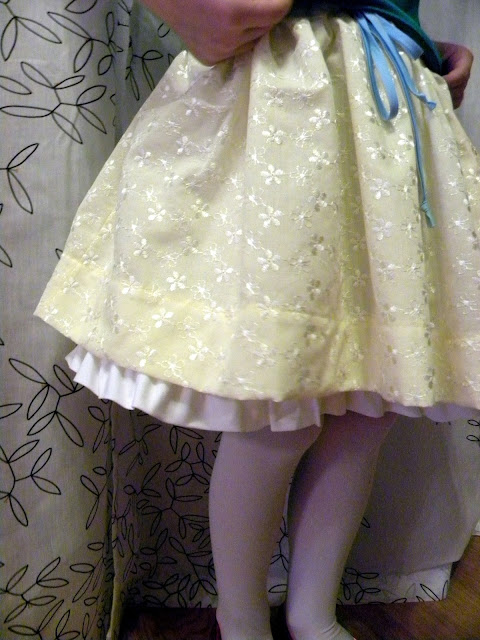 The pattern is for a flat front, drawstring waisted, full skirt with a cute little underskirt that adds major twirl factor. 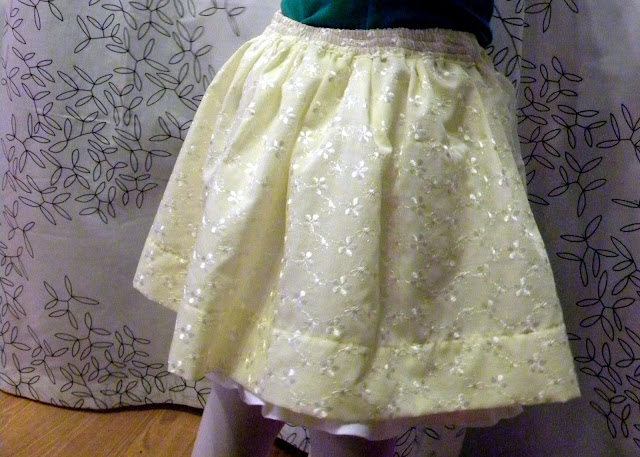 The pattern test was a little rocky for me. The diagrams were kind of small and not as clear as I'm used to. But all my concerns were addressed and the finished pattern looks to be much more clear. 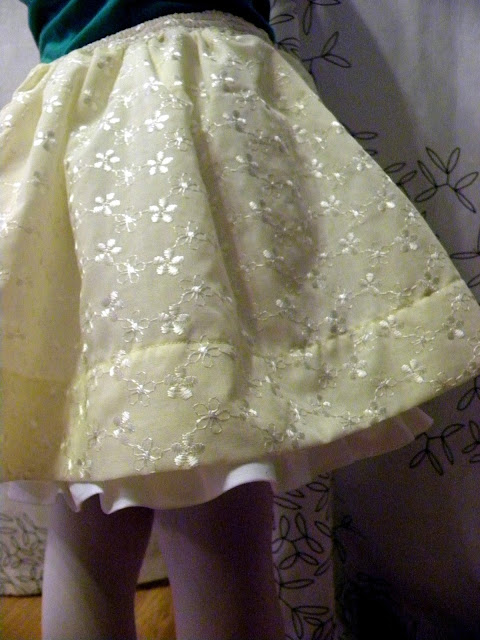 I haven't made another skirt from the pattern yet but I can see coming back to this one. I like the extra details that make this a little more special than your basic twirl skirt.

The Bug styled herself for this one. The bluish green shirt was a little much for me so we went with a white shirt for Easter Sunday. 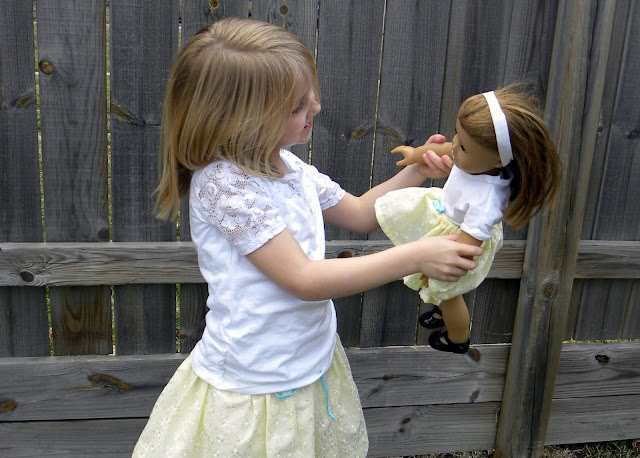 Emily got a new outfit too.  I couldn't help myself. 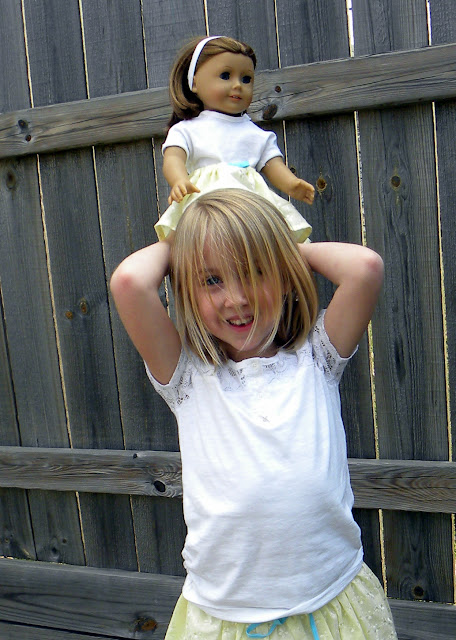 And look! The weather was nice enough for outside photos! Hooray!!

Posted by Lindsay @ 402CenterStreet.blogspot.com at 4:49 PM No comments: