This is a busy week for me at my real job.
I'm one of the coordinators for a big library fundraiser called Spring Into Art.  It's a great little art show with lots of stuff for the kids and bunches of free workshops where you can try your hand at making real art.

The Bug loves Spring Into Art. She looks forward to it every year and she takes sweet pride in the fact that Mommy helps plan the event.
I'm glad it's something she enjoys since it takes a lot of time and I'll be working odd hours this week because of it. 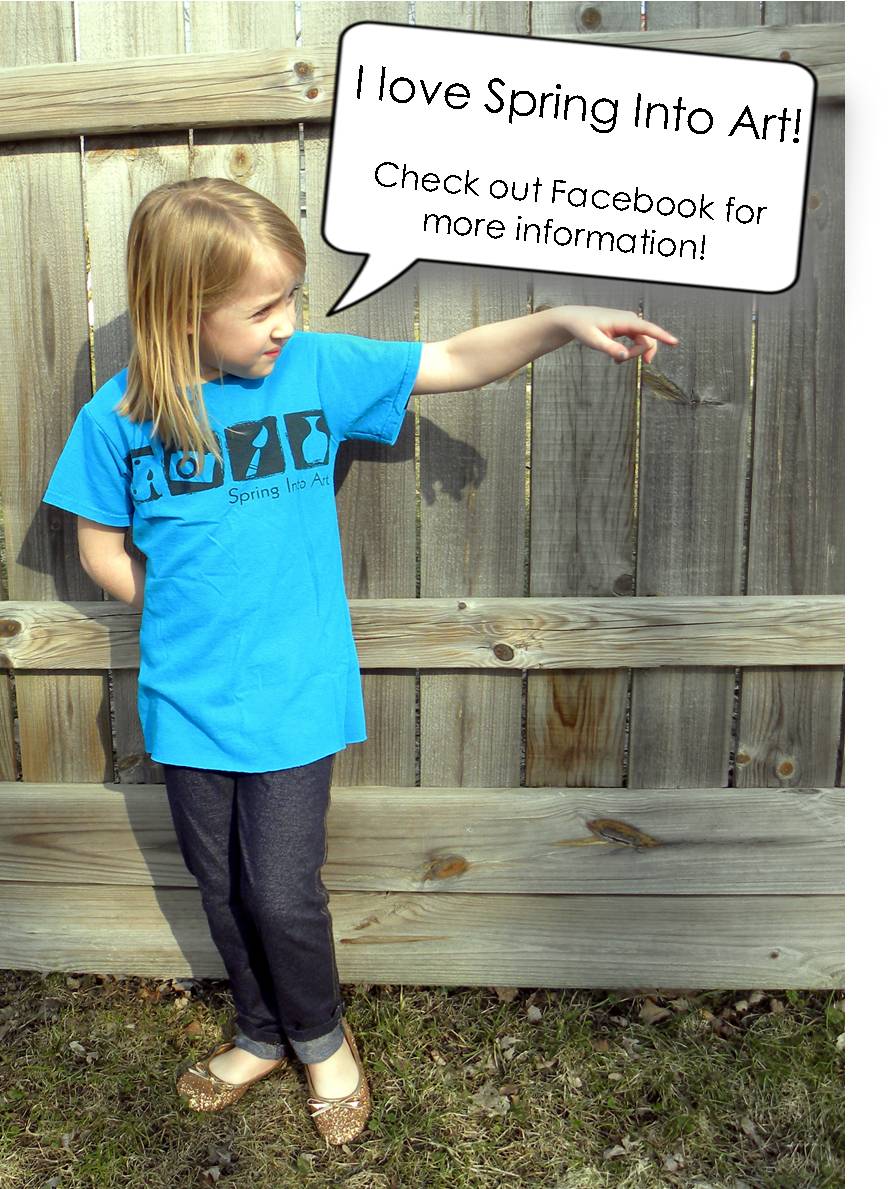 This year, she asked me if she could have a Spring Into Art tee shirt.
We don't have kid sized shirts because the shirts have only been for staff and volunteers in the past.
But she wanted to represent and that my my heart happy. So..... 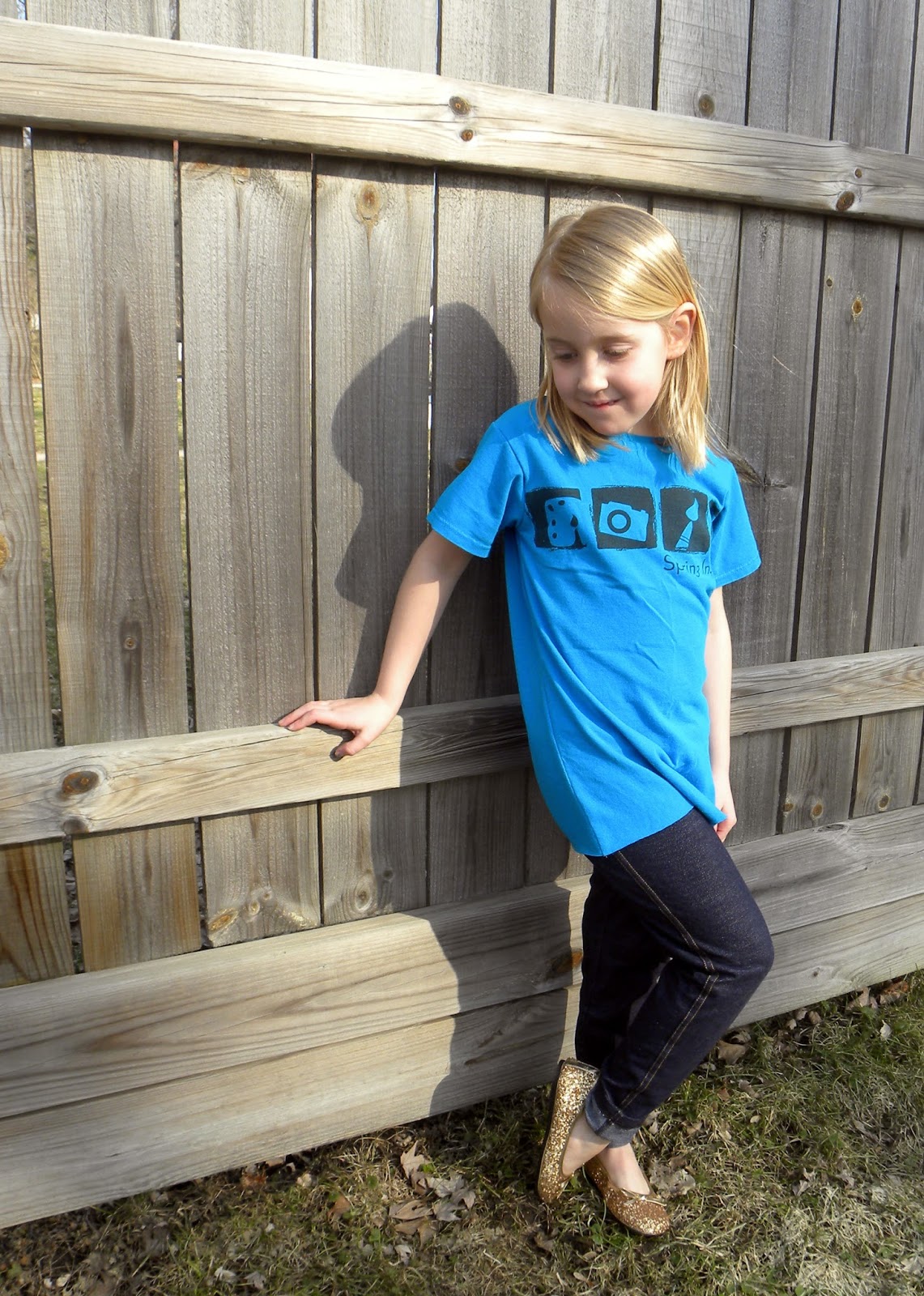 I cut up one of my old shirts that after a few years of wear had shrunk up a little funny and was no longer comfortable for me.  I used a tee shirt of the Bug's that fit her well and cut around it, leaving a fairly generous seam allowance and then I reassembled the shirt--in miniature. 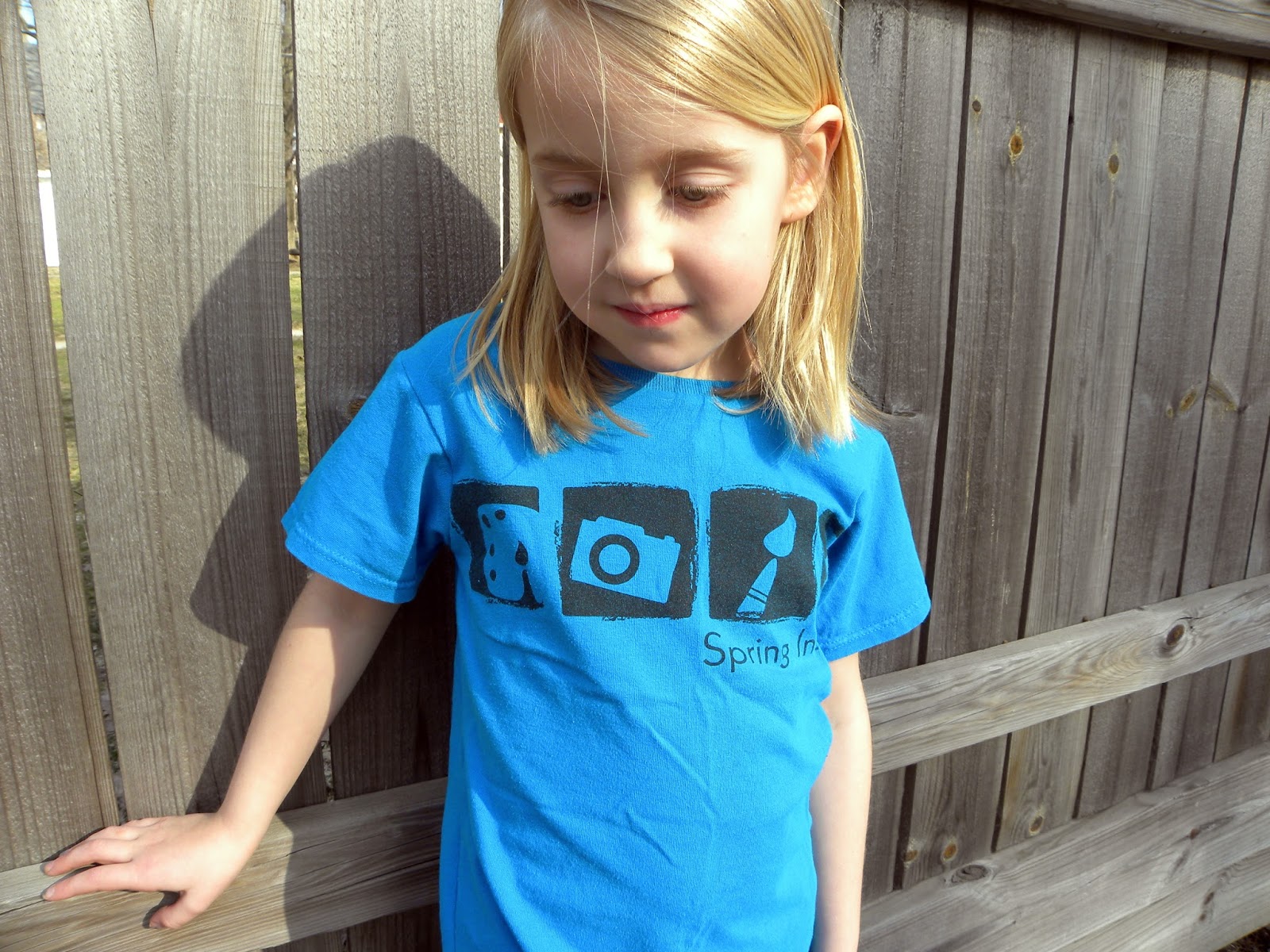 This was a really quick project. I used the existing sleeve hems and I reused the ribbing on the collar. I didn't bother with a bottom hem since it's knit and won't fray. If it starts to look sloppy after a while I can always put a hem in.

And there you have it, a simple little project that made Momma and Daughter ridiculously happy.

If you aren't busy this weekend, think about checking out Spring Into Art.

~Lindsay
Posted by Lindsay @ 402CenterStreet.blogspot.com at 7:00 AM No comments:

You may not have noticed, but I haven't sewn much in 2014.  I've had a bit of a creative block I guess. It was post Christmas exhaustion paired up with a healthy dose of the blues over the fact that The Bug is getting to be harder and harder to sew for. And the snow. Heaven help us the snow put me in a funk unlike any other funk. AND quite frankly, the sewing room had gotten way beyond out of control.

We had similar "out of control" issues in the downstairs "play room".  Both spaces needed a major clean up and purge because neither were functioning for us any more.  But more than a tidying up that was needed.  The Bug is growing up you see. Despite my denial of it.  She never played in the downstairs playroom anymore. She always played upstairs in her room where she has "privacy" (she is only 6... going on 16). And my upstairs sewing space, which was once a nice spot to work while waiting on Baby Bug to fall asleep was now feeling really far removed from the living space. 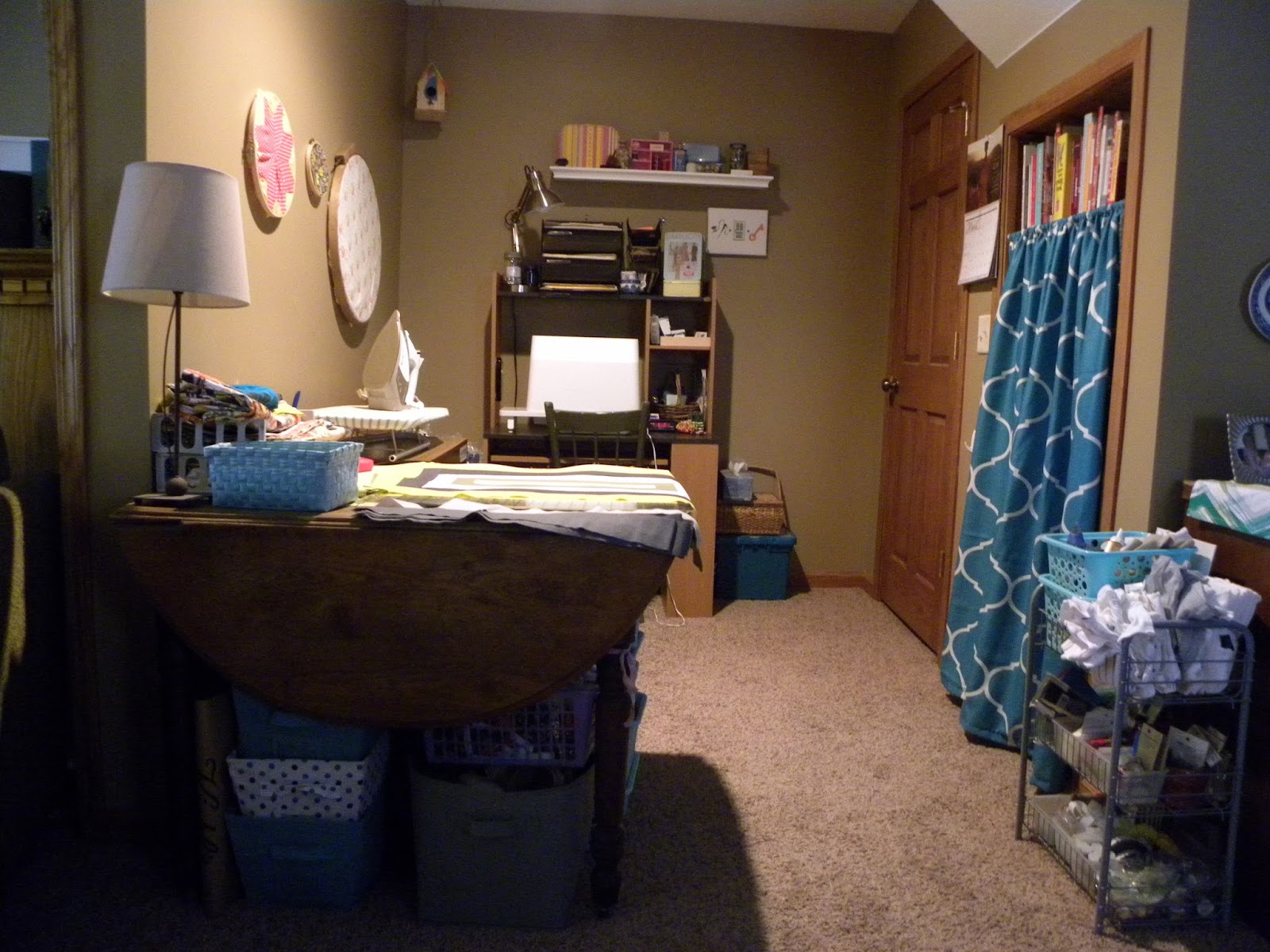 So we switched the two spaces!
They are approximately the same size rooms but it was a challenge to get everything to fit in a way that was functional. I'm loving it so far though. 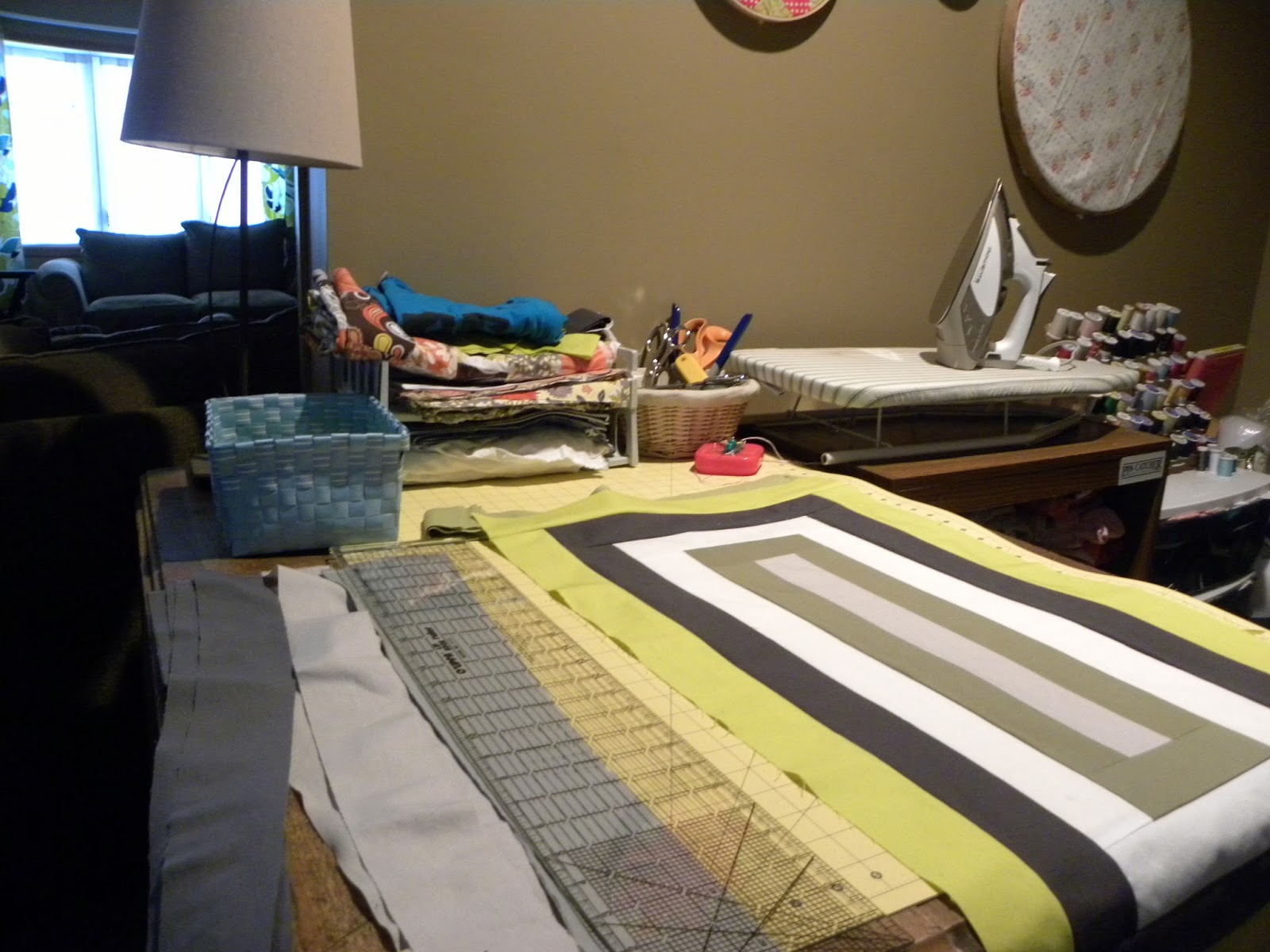 My work table is a family heirloom. You can't see it here because it's buried in fabric but it has such a neat texture and personality from years of use. I usually have my cutting mat and ruler up here. The blue basket holds scraps, the trays hold WIP's and the wicker basket hold scissors, rotary cutters and other little things that come in handy when cutting. 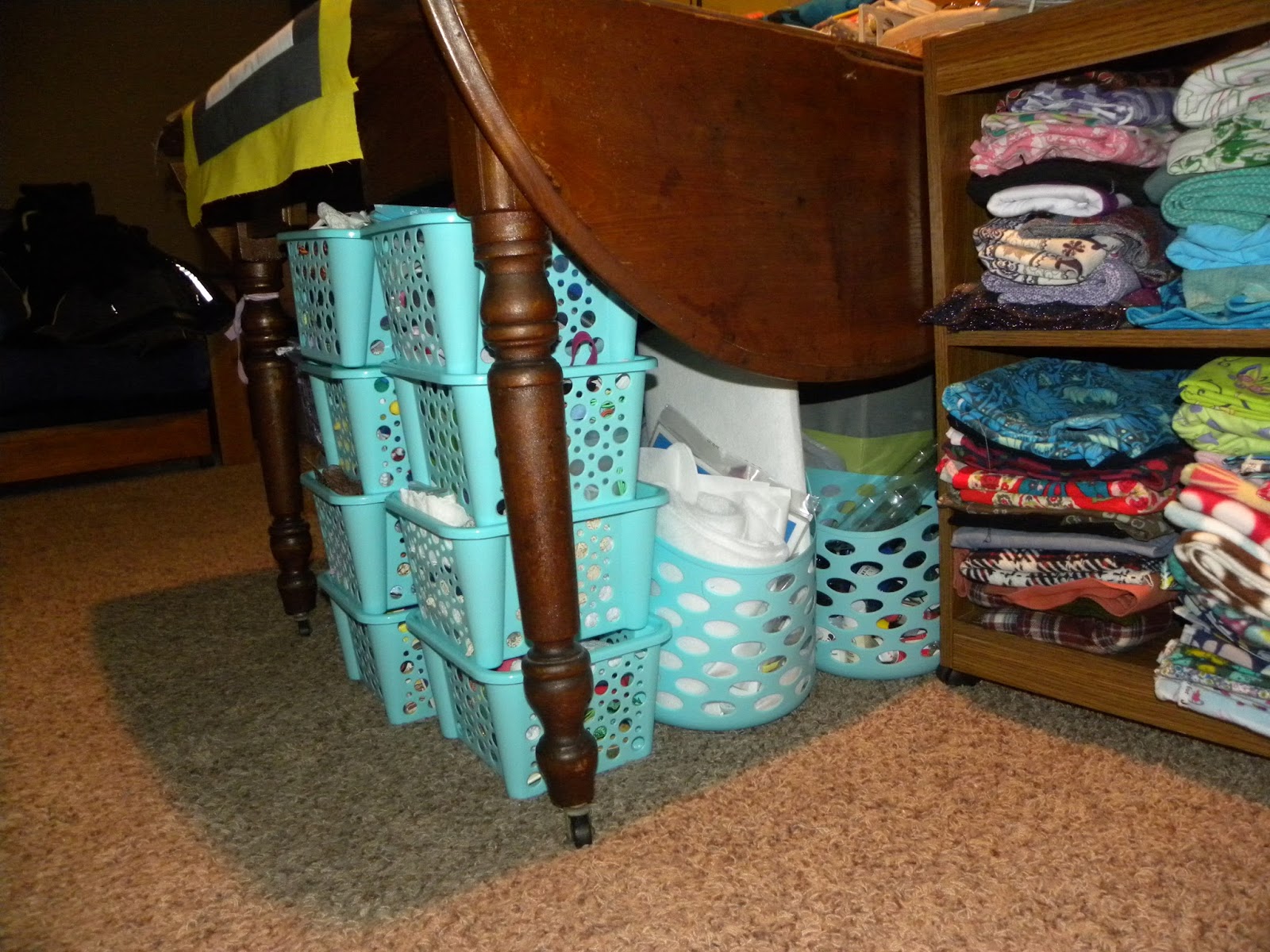 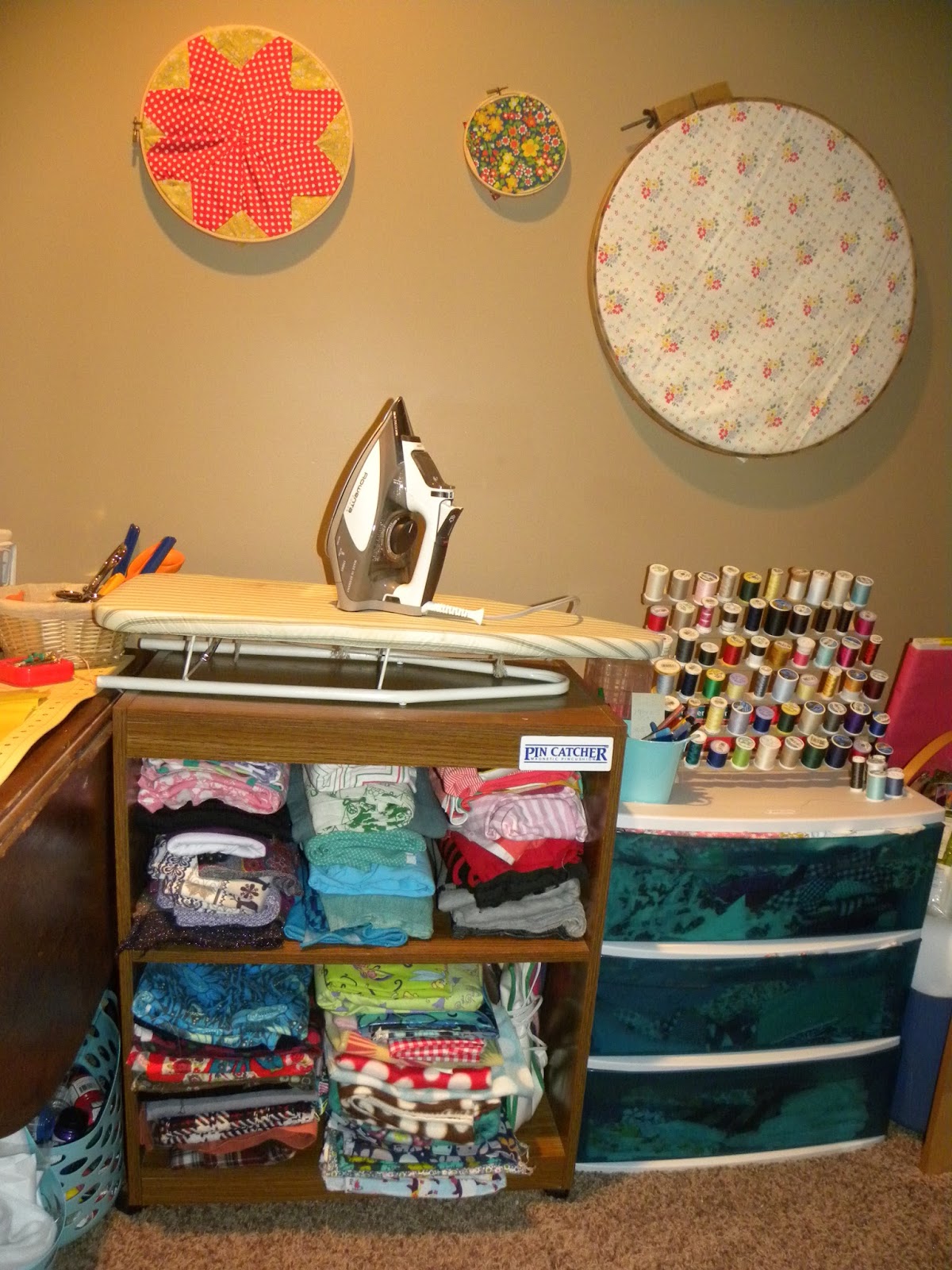 I've got this old microwave cart set up as my ironing station. Underneath, the shelves hold my knit, wool, corduroy, fleece and laminated fabric. The three drawer unit holds scraps. It needs to be purged because it's out of control. Baby steps though.

On top there you see my thread. I could probably use another of those holders, huh?

The little blue metal bucket holds fabric markers and chalk. The hoops on the wall were just sort of half hazardly flung there to use some nails that were there from old art work. I may add some more into the mix. I kind of like the effect. 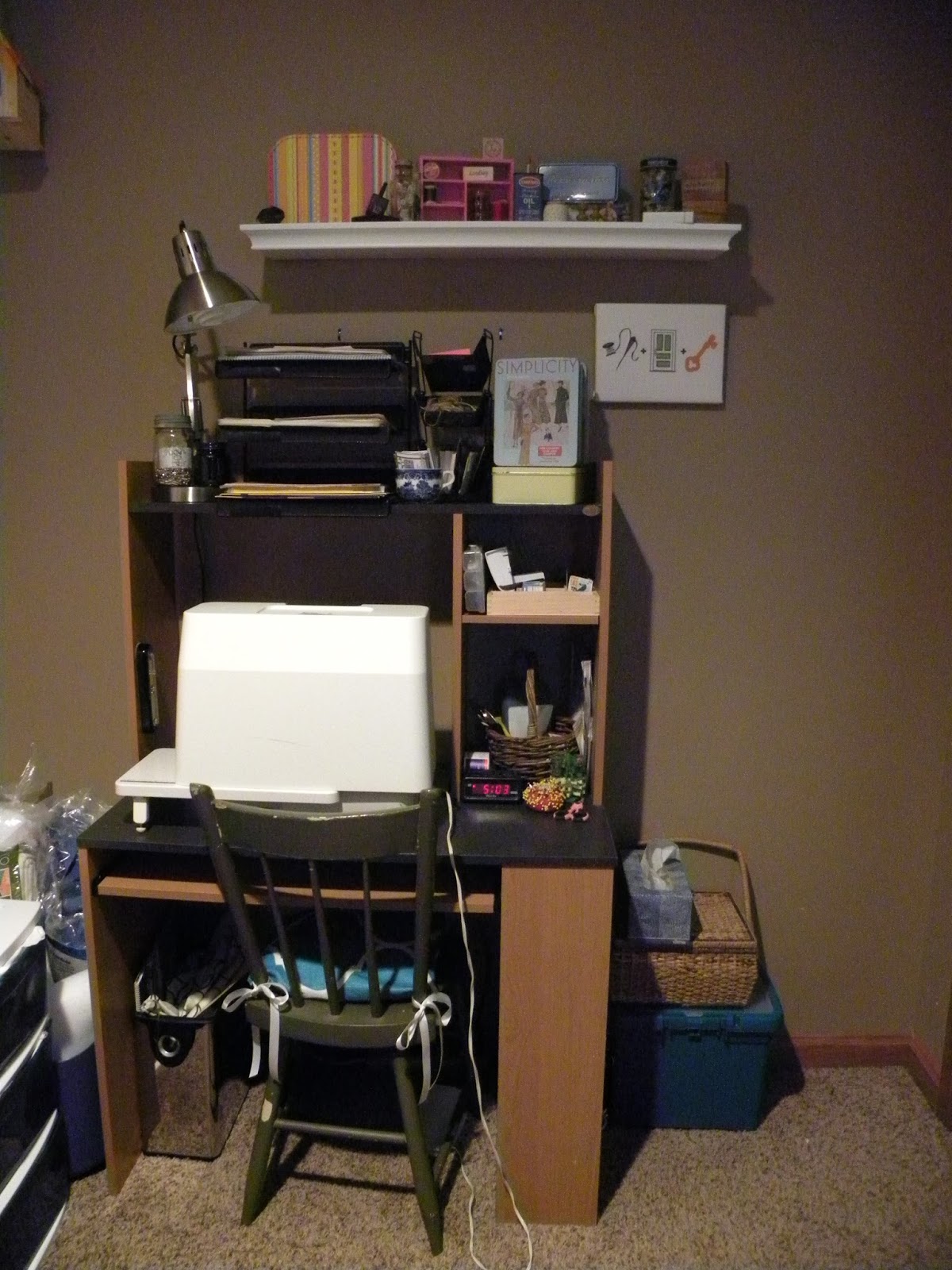 Around the corner is my sewing desk.  The chair is the one I remember sitting at my grandma's sewing machine. I made a little cushion for the seat to make it a bit more comfortable.

My batting and fiberfill are in a big bin that is tucked back in the corner. It's not pretty but it's fairly well hidden back there.

The top shelf of the desk holds some office supplies and some tins with vintage pattern covers printed on them that hold my old 4-H project patterns. Up on the white shelf there are several antique sewing notions that I've collected over the years.  The "Sew Door Key" art on the wall is temporarily hanging out on an existing nail. It will move eventually.

The sewing basket was from my Grandma when I first started sewing. The blue file box holds more WIP. It used to hold my pdf pattern collection but it's outgrown that little bin and now resides in a file cabinet in the closet. There are some side shelves on the desk that house my button jars and some other random things. 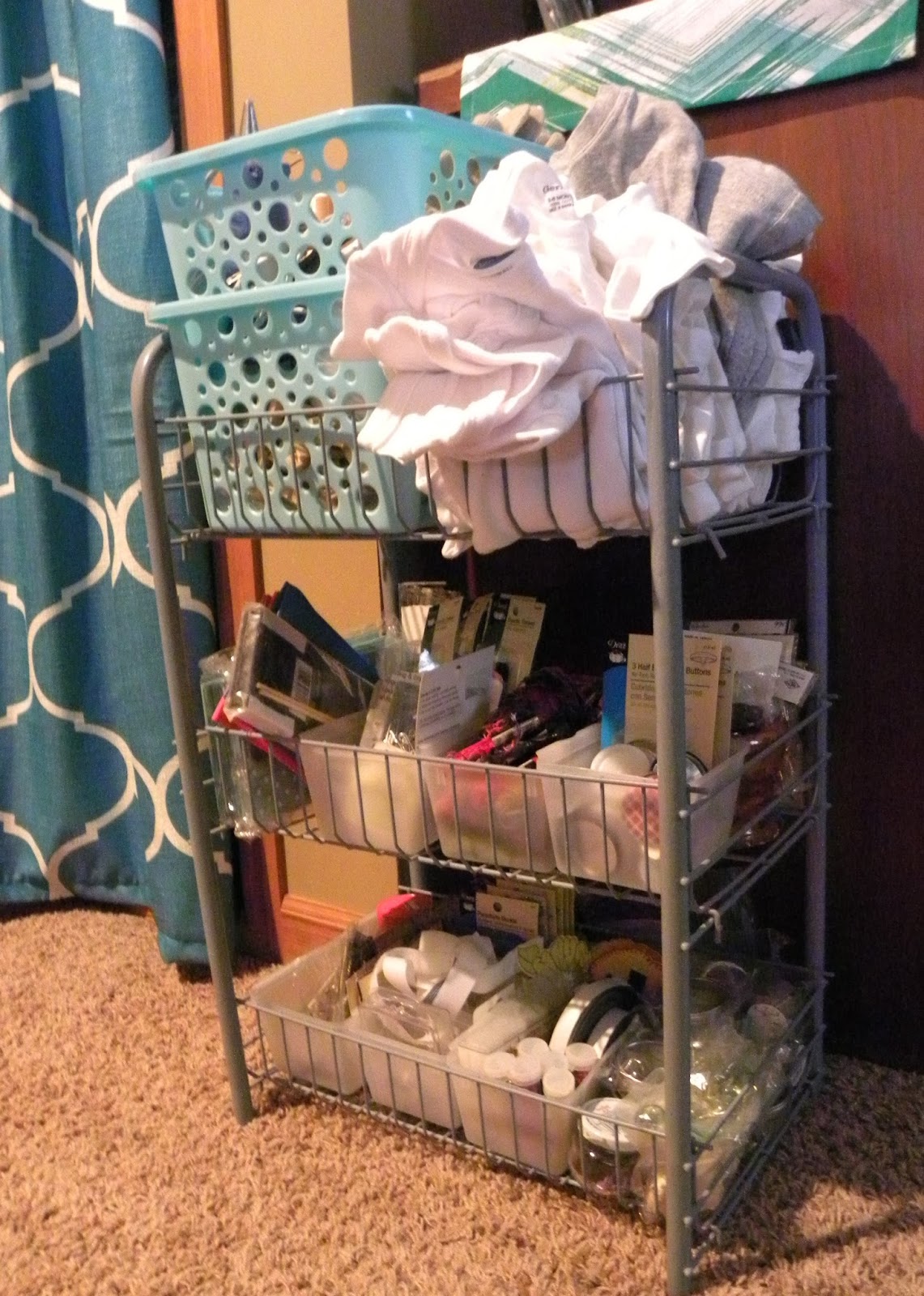 This cart will eventually be replaced with something a little nicer looking but it works for now. It holds all kinds of little things and craft supplies. There's velcro, D-rings, glitter, magnets, clasps, embroidery floss, buttons to be covered, glue guns... Everything miscellaneous lives here. 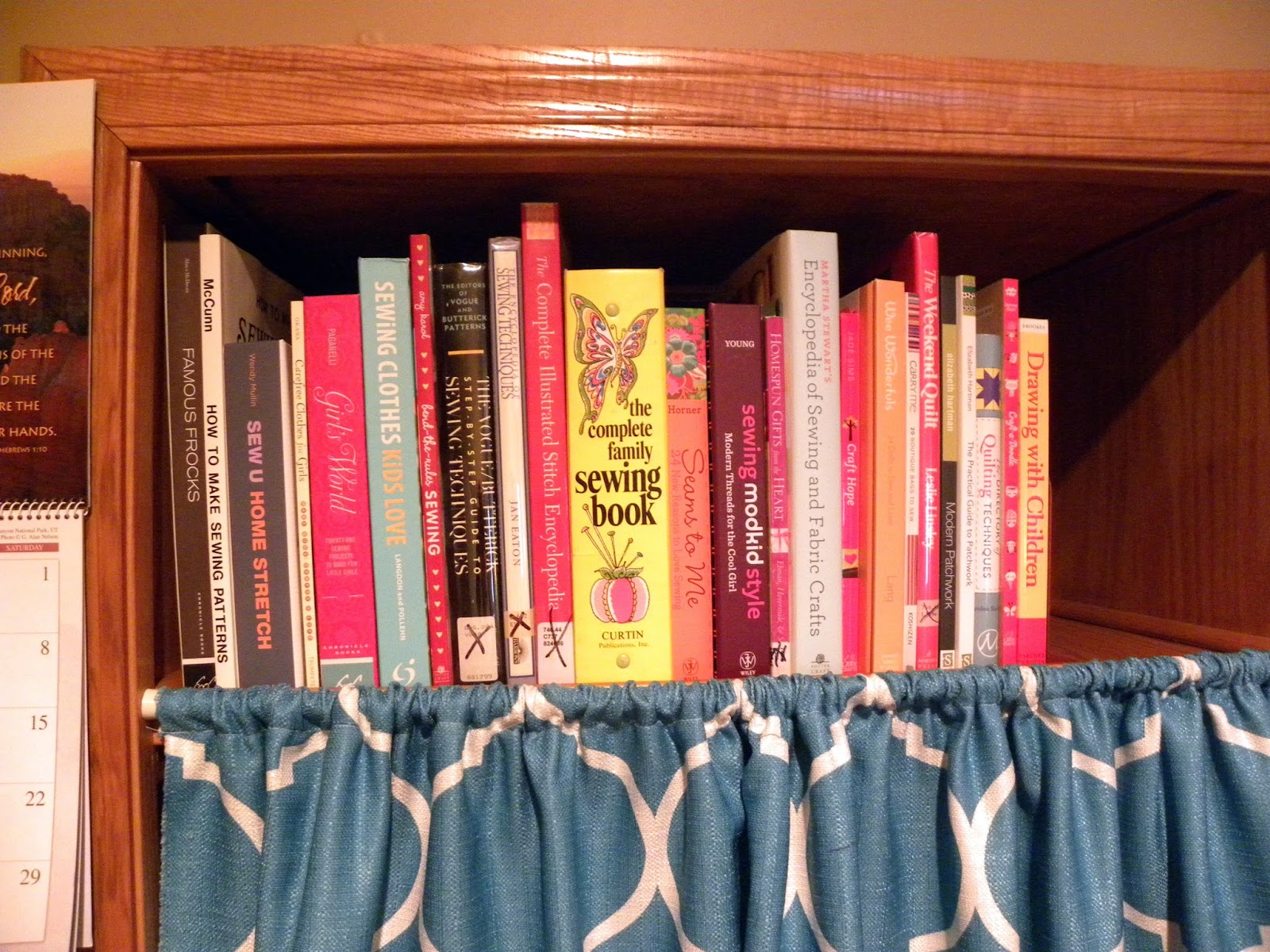 These built in bookshelves have enough room for all of my sewing and crafting books with a little room to spare! 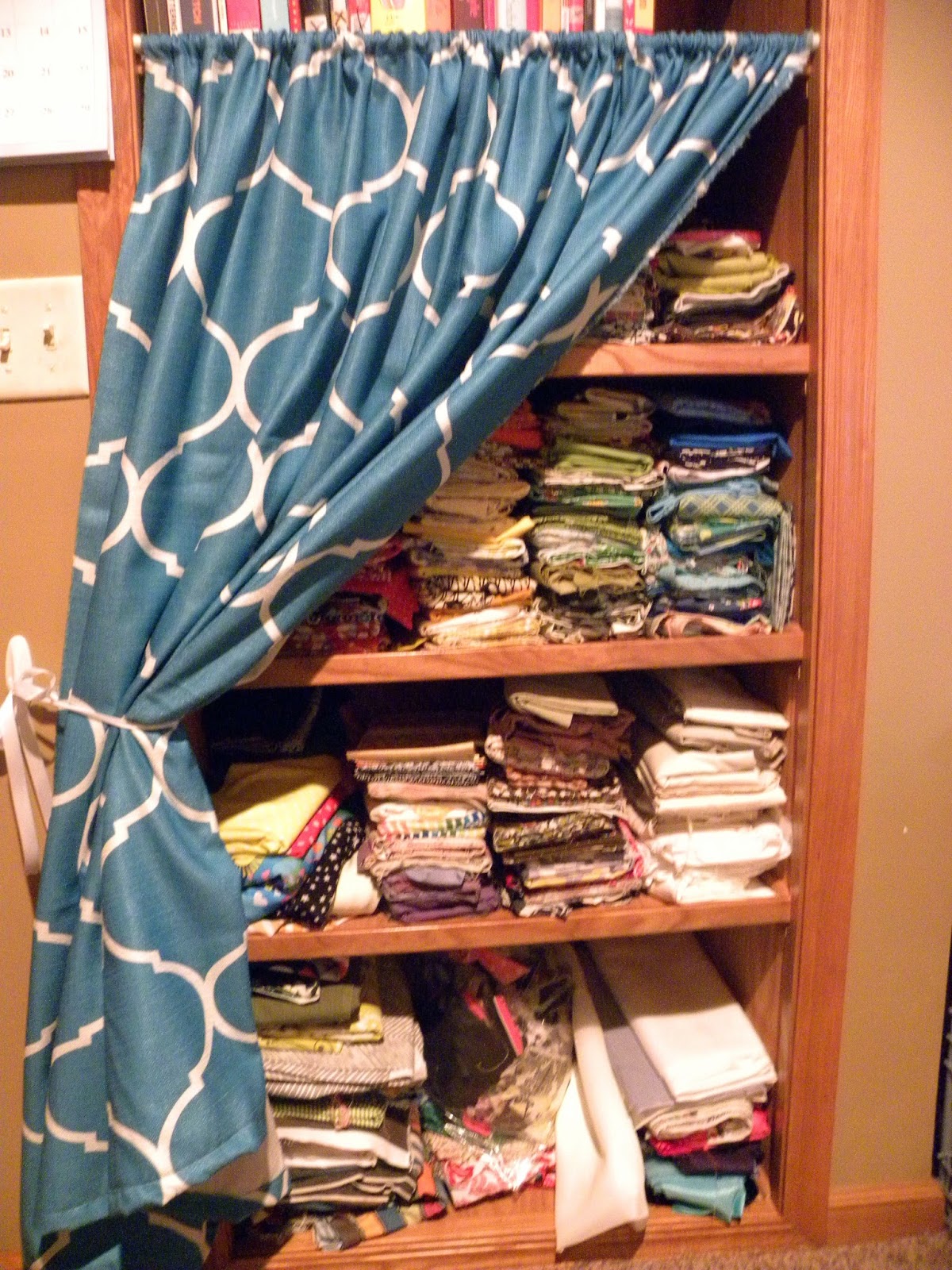 And the bottom shelves hold the rest of my fabric stash.  I weeded out three garbage bags full to donate. It was painful, but necessary and in the end, it felt good. We took the fabric to a thrift store here that has a fabric section. It helped me to know my fabric would be going to others who have a similar appreciation/obsession.

I made the curtain to hide the fabric shelves. They are organized now but they might not always be! The fabric was something I ordered from fabric.com that didn't quite work for the project I intended it for but is absolutely perfect for this. (It looks like it's no longer available! Boo) I slipped it onto a tension rod for a very simple, pretty little curtain.

As soon as everything got set up I sat down to sew. I've sewn more in the last week or two than I did in the last two month.  I like being able to do a little work here and a little there as I have time during the day. And it's nice to at least occupy the same general space as my husband in the evenings. It makes me feel like we are hanging out even if we are each working on our own things.

It was so much work, but definitely time well spent.


~Lindsay
Posted by Lindsay @ 402CenterStreet.blogspot.com at 10:35 AM No comments:

In the Shadow of Jezebel Scavenger Hunt Blog Hop

I don't often (o.k. ever) do things like this since this is primarily a sewing blog, but when the opportunity came along to take part in this blog hop/scavenger hunt to help promote Mesu Andrews' new book, In the Shadow of Jezebel, I knew I wanted to be part of it.

Mesu and I met when my husband was called to be the youth minister in the small town in Northern Indiana where we currently live. Her husband was the Associate Pastor at the time.  Mesu welcomed me with open arms, in a way no one else really did.  In the first few months after moving, Mesu took the time to show me how to get to Target, JoAnn's and Hobby Lobby.  I am eternally grateful (and lighter in the wallet).  Is that enough of a sewing tie in?? Whether it is or it isn't, I hope you will play along.

We are having a scavenger hunt! Wanna play? Read the rules and then jump right in!
Somewhere in my review below, there is a single word that is in BOLD AND ALL CAPITALS. Write it down. Then, go to the other stops to find more hidden words. Once you have all the words, unscramble them to find a verse from the Scriptures. You can enter it into the Rafflecopter on any of the stops to have a chance to win a great prize from Mesu herself!

Princess Jehosheba wants nothing more than to please the harsh and demanding Queen Athaliah, daughter of the notorious Queen Jezebel. Her work as a priestess in the temple of Baal seems to do the trick. But when a mysterious letter from the dead prophet Elijah predicts doom for the royal household, Jehosheba realizes that the dark arts she practices reach beyond the realm of earthly governments. To further Athaliah and Jezebel's strategies, she is forced to marry Yahweh's high priest and enters the unfamiliar world of Yahweh's temple. Can her new husband show her the truth and love she craves? And can Jehosheba overcome her fear and save the family--and the nation--she loves? With deft skill, Mesu Andrews brings Old Testament passages to life, revealing a fascinating story of the power of unconditional love.


My Review of this Book

Confession: I have never loved reading the Old Testament. History is not my thing and it's always kind of seemed like a dry old history book.

I love reading people's stories though.

Mesu's books bring life to the Old Testament.  She has a gift for story telling that accentuates what is already there by engaging the imagination.  She paints beautiful, detailed pictures of Biblical lives and times that make me want to dig into the Old Testament Scriptures and remind me of the beauty and wonder that is within.

God worked and spoke In Old Testament times too, in different ways, but in ways NO less beautiful or miraculous.

I am always impressed by the extensive research Mesu obviously does for each book.  I've read all of Mesu's books voraciously cover to cover.  In the Shadow of Jezebel is no different.  I couldn't wait to get my hands on it and once I did I could not put it down.

"Mesu Andrews has pieced together Scripture's truths with historical supposition through her masterful, research-based writing and captured the spiritual climate of those ancient days."--CBA Retailers+Resources on Love in a Broken Vessel "Andrews weaves a beautiful tale and takes readers to an ancient Jerusalem rich with history and customs and a culture that struggles to follow the one true God."--RT Book Reviews, 4½ stars, on Love's Sacred Song

Mesu Andrews is the award-winning author of Love Amid the Ashes, Love's Sacred Song, and Love in a Broken Vessel. Winner of the 2012 ECPA Christian Book Award for New Author, she has devoted herself to passionate and intense study of Scripture, bringing the biblical world vividly alive for her readers. She lives in Washington.

Stops on the Scavenger Hunt


Got all your clues? Enter the giveaway here!

a Rafflecopter giveaway
Posted by Lindsay @ 402CenterStreet.blogspot.com at 1:00 AM 1 comment: